Hits don't just happen . . or maybe they do. So, how does Rivers come up with an idea for a song? ...Each song is different and so is the story behind it. Here are a few of those stories.

Check back often to learn a little about how some of Rivers' biggest hits and favorite tunes got their start.

Tim (James) had the idea for "Southern Style" and we took it to Darius backstage at a show somewhere in Pennsylvania. I can't speak for Darius or Tim, but my inspiration for this song is my wife, Ali. She tells the story of her first day at Ole Miss (University of Mississippi) with her hair all piled up big and her makeup on just right (laughs). She said she walked out of her dorm, looked around at all the pretty Ole Miss girls and said to herself, I'm gonna need to get a sense of humor in a hurry! She is a beautiful woman with a beautiful heart and she truly doesn't "believe in strangers/only sinners with a Savior."

While shaving one morning, thinking about the day’s events, it occurred to me that I was writing with the great songwriter Tom Shapiro. So, I started humming, hoping something would present itself. When I got to his office, we talked for a little while then got around to business. “You got anything?” he asked. I played this little verse I had going - he said he had an idea that might work for it. I thought “there ain’t nothin’ bout you that don’t do somethin’ for me” was a little clumsy for a title but in the interest of time, I jumped on in and we wrote the song. We decided that we enjoyed working with each other and that if we kept it up, we just might write a real hit. The song we so easily dismissed has been the most successful song either of us has ever written and the biggest single of Brooks and Dunn’s career.

At a party one evening my friend Claudia walked up to my wife and said, “I just love Rivers, and I’ll tell you why: Cause he’s a bad boy, but he’s a good man”.

My wife pulled me aside and asked, “who is this woman, and why does she know so much about you?”

I laughed and explained that she was a friend and not to worry about it cause she just put one of the kids through college!

Tonight I Wanna Be Your Man - Andy Griggs, Top 5 Record

We were putting some hardwood floors down in the house and had to move out while the work was being done. We packed up our three children and moved in with some good friends. Four adults, 5 children, and two dogs don’t leave much room for a loving, young couple.

Demonstrations of affection were limited to quick hugs, so suffice it to say, I was frustrated. I wrote “Tonight I Want To Be Your Man” one day, played it for my wife that night, and nine months later we had our fourth child.

Raise Him Up - Randy Travis

My oldest daughter was lying in a coma at Vanderbilt Hospital when a good friend and co writer of mine arrived and handed me a sketch of a song we had started. I told him that it was not a good time for me to think about working, but he insisted I take this piece of paper. I remember absentmindedly shoving the paper into my back pocket and muttering something like, “see ya”.

A few days later I found that typewritten sheet and glanced over it. It didn’t take me long to see why he had insisted I look it over. When my daughter completely recovered I got back together with my friend and finished “Raise Him Up”.

"These Are My People" 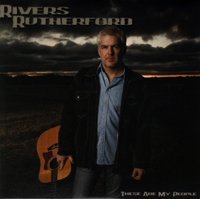 Buy the CD or the Digital Album!