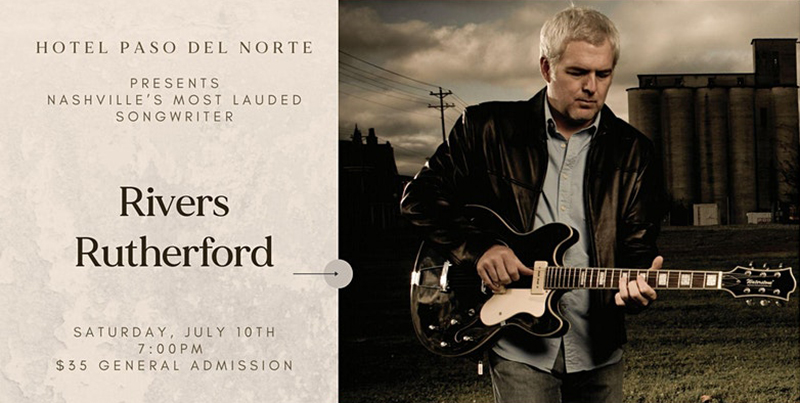 With a name like Rivers Rutherford, it's no surprise this soulful storyteller and recent Nashville Songwriter's Hall of Famer was destined to become one of music's most talented and accomplished singer-songwriters. Having grown up in the shadow of Elvis' Graceland homestead in Memphis, Rutherford came out of the gates swinging at 21 years old, landing his first cut with American legends Johnny Cash, Willie Nelson, Waylon Jennings, and Kris Kristofferson (aka The Highwaymen). What followed were a dozen #1 hits, multiple Grammys, CMA and ACM nominations, and over 20 ASCAP awards, including both of the coveted awards for Country Song Of The Year and Songwriter Of The Year, all of which have firmly established Rutherford's position within the upper echelon of Nashville's most lauded songwriters.

Known for his gritty southern style, Rutherford is unapologetic about his faith, devotion to his family, and making great music. His decades long career, the countless hits to his credit and his ability to write music that is timeless is a testament to a man that has come to be respected as an artist in his own right.

Currently signed to Verse 2 Music (a Sony Music Publishing joint venture helmed by Kane Brown and Kent Earls), Rivers continues to write with and for the biggest names in country music. He's also returned to his early troubadour roots and maintains a rigorous touring schedule (over 50 dates a year), bringing his rip-roaring brand of no-holds-barred entertainment to audiences all over the world who come to hear his familiar hits straight from the source. With a persona that is at once direct, raw, and impassioned, Rivers possesses the shrewd skills of a storyteller who is capable of cutting right to the heart of the matter—a trait that leaves his talent both unique and timeless.

"These Are My People"

Buy the CD or the Digital Album!